← more from
Waveshaper Media
Get fresh music recommendations delivered to your inbox every Friday.
We've updated our Terms of Use. You can review the changes here. 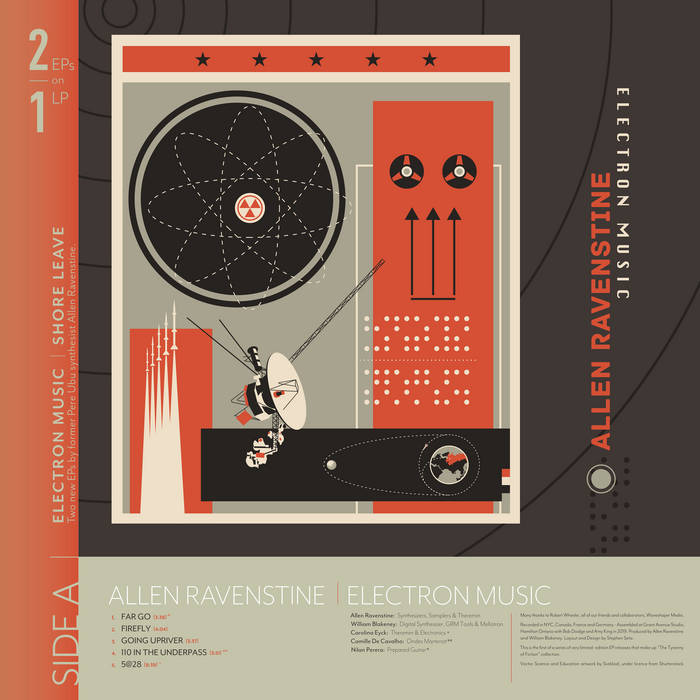 Elmore L. This is a truly beautiful pair of EPs. much as I've loved, or been fascinated by, Allen Ravenstine's previous work, this seems a leap forward to me. I can see why Harry Partch is mentioned; other tracks sound like something Bowie and Eno might have produced had they continued to create and refine their approach to instrumental tracks started with 'Heroes' and Low for another 43 years. Truly outstanding music, worthy of far wider recognition.

Waveshaper Media is thrilled to present Electron Music/Shore Leave, a new LP by former Pere Ubu synthesist and electronic music trailblazer, Allen Ravenstine. The LP is comprised of two EPs (1 per vinyl side), the first two parts in Raventine’s new Tyranny of Fiction series. Waveshaper Media first came into contact with Ravenstine when we interviewed him in 2012 for our modular synthesizer documentary I Dream Of Wires.

For those in the know, Allen Ravenstine has been one of the most creative synthesizer players of the past forty-plus years. Ravenstine started out in the mid-1970s experimenting in his Cleveland apartment with an analogue EML 200 synthesizer, eventually creating a piece in 1975 that became known as Terminal Drive. While he had no intention of releasing his compositions, word got out about the kind of sounds he was experimenting with, which led to an invitation to join pioneering “avant garage” group Pere Ubu for the recording of the group’s first 45, “Thirty Seconds Over Tokyo.” He soon joined Pere Ubu full-time, bringing to the band’s sound unpredictable textures, effects, bleeps, squalls, pulsating washes of sound—whatever he felt could enhance the soundscape of the band’s performances and recordings.

By the early 1990s, Ravenstine had grown sick of the road, band infighting and the music industry in general. Deciding a change was needed, he opted to forego music altogether, making his living as an airplane pilot. His music career remained in limbo until 2012, when an interview for the I Dream Of Wires documentary, alongside Robert Wheeler who had succeeded him as Pere Ubu’s synthesist, turned into a recording session for the duo, leading to a series of collaborative releases. As well as having his 1975 Terminal Drive recordings released to great acclaim in 2017, Ravenstine has been prolific in recent years, with Electron Music/Shore Leave now marking his 3rd solo full-length.

Electron Music/Shore Leave brings together ten of the prodigious composer’s most recent lyrical and abstract compositions collectively comprised of the sounds of analogue and digital synthesizers, traditional acoustic instruments and the sampled sounds of birds, dogs and other artifacts of nature. Working prodigiously on a daily basis, over the past two years Ravenstine has amassed a large number of atmospheric recordings that he has intuitively aggregated into groups of five pieces each. The first five recordings, subtitled Electron Music, are found on Side A of this LP while the second five, Shore Leave, comprise Side B.

Ravenstine played the majority of the sampled instruments on these recordings as well as piano, Moog theremin, a Roland Aerophone and a bevy of synthesizers including a Korg MS20, EML 200, and a Doepfer Dark Energy. Recording virtually over the internet due to the covid pandemic, collaborators from around the world contributed Ondes Martenot, prepared piano, transverse flute, trumpet, saxophone, double bass and percussion. The result is a heady, disparate brew of compositions that range from abstract to lyrical, in the process conjuring up a bricolage of ambient soundtracks, jazzy miniatures, space age exploration, world music, Erik Satie-like studies and the ghost of Harry Partch. As a collection Electron Music/Shore Leave is a stunningly mature work that provides new and surprising sonic rewards with each and every listen.

The album contains 10 songs on vinyl LP - limited to 300 copies, with 100 on orange-vinyl, and 200 on standard-black. The recordings are also available on two separate CD-EPs: Electron Music (wsm05 CD), and Shore Leave (wsm06 CD).

Allen Ravenstine has been one of the most creative synthesizer players of the past 40+ years. He started out in the mid-70s experimenting with an EML 200 synthesizer, & soon after joined pioneering “avant garage” group Pere Ubu - bringing to the band’s sound unpredictable textures, effects, & pulsating washes of sound. After leaving Pere Ubu in the '90s, his music career was in limbo until 2012. ... more

Bandcamp Daily  your guide to the world of Bandcamp